Today’s blog post is a bit different. It is not about who signed and sent or received the real photo postcards (RPPC) I’m about to share with you, but who’s in it.

These four RPPCs from my collection were printed to advertise the famous play called “Old Heidelberg” (“Alt-Heidelberg” in German), starring actor Konrad Gebhardt and Olla Bauer in the Hamburg City Theatre, Germany.

“Old Heidelberg” is a German romantic play by Wilhelm Meyer-Förster, first performed in 1901. While studying at the Heidelberg University, Prince Karl from Saxony falls in love with Käthie, an innkeeper’s daughter, but has to give her up when his father dies, and he is called to return to his homeland and rule as King. The work was a major international success and became one of the most performed plays in Germany during the first half of the 20th century. It was even turned into a Hollywood silent movie in 1927, starring celebrities like Ramón Novarro und Norma Shearer.  (Source: Wikipedia)

But let’s return to the actor Konrad Gebhardt and actress Olla Bauer, here depicting a scene as lovers from the said play.

Konrad Feodor Leopold Gebhardt was a German actor and radio speaker. He was born on December 4th, 1881, in Berlin, and made his acting debut in Harburg-Hamburg in 1900. After a short stay in Frankfurt, he returned to Hamburg and worked for the rest of his career as an actor in the Hamburg City Theatre as well as a radio speaker. He never made it big in the silent movies. I wonder if his voice was so powerful that it took away from him as an actor if it was silenced?

Gebhardt married Auguste Wilhelmine Marie Köhne on June 1st, 1911, in Hamburg. I don’t know if the couple had any children. Unfortunately Gebhardt died on May 3rd, 1937, at the young age of 55. He is buried at the Hamburg Ohlsdorf Cemetery. 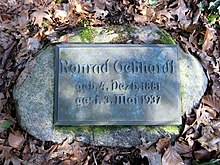 Not much is known about the actress Olla Bauer. She was born in Vienna, Austria, and until 1925 belonged to the crew of Hamburg City Theatre, alongside Konrad Gebhardt. She retired from the stage in 1925 and dedicated her time to organising fund raisers and charity events in support of the Jewish community in Hamburg. Unfortunately, I don’t know what her own fate was.

Who is the third person in this next photograph? I cannot make out his name. But surely another actor in the crew to play “Old Heidelberg” in the Hamburg City Theatre.